The shy senior had pissed off the wrong bullies by ratting out their party—and their revenge was diabolical.

They waited for the perfect moment to strike.

The men's locker room was adjacent to the main gym, and today was the big game.

Jacob was pulling his gym shirt over his head to change when someone grabbed him from behind. While his ambushers held his shirt over his head, he felt unseen hands rip his sneakers off, then his socks, his watch, his shorts, and finally, his briefs.

They dragged the naked lad toward the door to the gym, hands muzzling his cries for help. The bell rang. Fuck, today was the pep rally! He heard the muffled noise of the crowd filing in.

He suddenly realized what was going on. His captors got the timing perfect, flinging the door open and hurling him through at the worst possible moment.

His heart raced; his vision was blurry. He tried to bang on the door for what felt like an eternity. The crowd slowly grew quieter as heads turned toward the bare-bottomed lad banging on the metal door. He turned around, at first feeling a few eyes on him, then dozens.

Every one of his peers sat, gawking, shocked, and giggling at every inch of his bare naked body. Panicked, he felt faint as he frantically scanned the court for a way out. He saw the door to the hallway across the basketball court. His instinct took over... 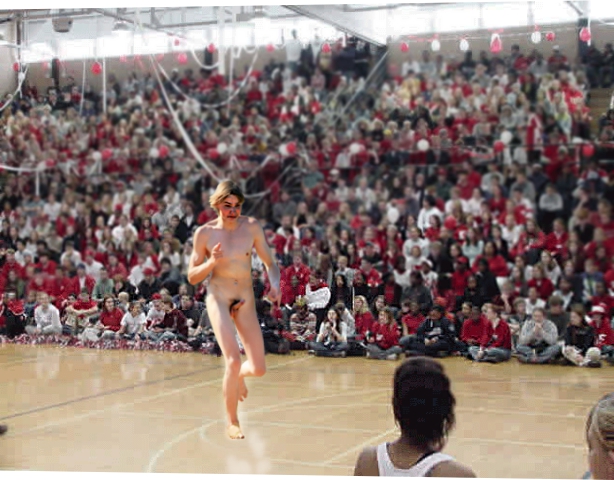