A great bit by the CFNM writing luminary Aaron Burr:


At Millard Fillmore High nude swimming for boys had always been a fact of life, as at all American schools and colleges and YMCAs. Yes, as late as the 1970s. So if you were male you went to the change room and stripped off completely, and with bare flesh tingling, walked through the big metal doors into the chlorine-scented pool area where a male coach, sometime nude himself, took over the training.

Girls and female teachers were aware of this practice and there were running jokes about peeping. Did they really have loose bricks and peep holes from their own change room? They teased us about it with wicked smiles. We couldn’t find any holes but the rumours made our flesh creep. A dirty-minded girl might even make threats about bursting in on us. Indeed on some occasions we were in the pool when a female teacher came in on a pretext to talk to the coach, sometimes capturing him nude- which he plainly enjoyed- and once a whole class of girls arrived early for the lesson because coach had let us run over time, perhaps on purpose (it was one of the days when he chose to be in shorts and T shirt, not nude).

On this awful occasion we were able to creep out of the pool on the far side, keeping our backs to them but ensuring they were rewarded with what they must have found titillating glimpses of our rear ends. There were lots of wolf whistles and, later, corridor teasing. Including suggestions they might have glimpsed more than our nates. We were very disturbed that on this occasion they had been accompanied by an attractive younger teacher on whom all of us boys had a crush. That she had seen us in such an unflattering light was shocking. When anyone of us saw her after this affair it seemed she was smiling at the memory of the time she had caught a glimpse of our nude backsides. And, yes, perhaps more as well.

Coach made his reputation with our competitive performance and once a year he had us pose for team photos. We were all given copies but they never appeared in the year book or on notice boards. Just as well, because we were made to pose in the nude and while the pic was meant to show us from the waist up there was sometimes a glimpse of pubic bush and occasionally a hint of a bit more anatomy than the laws of modesty might allow. But that was alright. The pics weren’t distributed. If there was some pubic hair shown or a hint of prick we sure as hell didn’t show our sisters or moms. We stuffed them between the pages of Popular Mechanics.

Then in 1972 the worst imaginable thing happened. The pic of our senior swim team, snapped by the coach, appeared on page nine of the yearbook. Two rows of six boys. Those behind were safe but four in the front row were compromised: pubic bush was captured, and in two cases a sight of penis stem- and in the case of athletic, good looking Tommy Lazarus, the full stem, and the cap as well.

There he sat, with a handsome smile, not dreaming that he was going to be captured below the waist and, if he had been, that the team photo would be published!

Every girl got to see him. Every mother as well, and all the female teachers. Got to see his cock. All of it.

Apparently the year book was being handed around the neighbourhood so that even outside the school community there were sisters of his friends, girls from church, ladies in his mother’s circle and even shop assistants from Main Street who would give him knowing smiles, swipe glimpses of his trouser front or even ask him about his swim performance, smirking.

He thought of all the female teachers...

...and the really pretty ones who might have seen bigger cocks on their boyfriends...

...all of whom had been staring at his privates.

When we asked him what his mother and two sisters had said, he just darkened and looked away.

“Look,” the coach said. “You guys are too modest. I want the whole school- girls and lady teachers included- to watch us train. In the nude, yes. Yep, naked as jays. And to make you feel better, I will be nude as well...”

And he showed us an old pic that showed girls in the pool wearing costumes- I guess from the 1930s or 40s- and fellas along the edge of the pool, just behind them, naked as jays.

It astonished us. On top of Tommy’s humiliation it got our imaginations racing.

I wasn’t the only guy who jerked off that night. In terror and excitement. 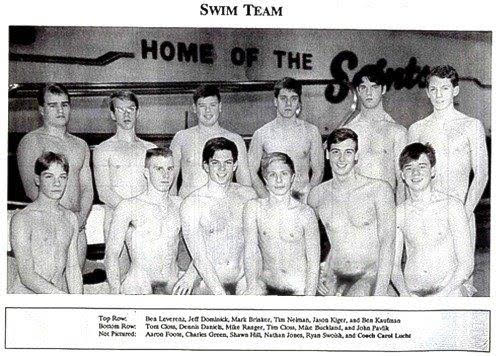 Posted by geilerJunge at 6:06 PM 2 comments: