On Display: Naked and hating it

19-year old Liam slowly rose up from leaning over the chair. He felt the belt's sting reverberate on his bare cheeks.

The comments were the worst part. Look how red his ass is!

His weiner! The girls shrieked with laughter. You can see everything! He has extra skin covering his thing, one of them whispered mockingly, adding to his torment.

His balls are hairy too!

Liam sniffled, on the verge of tears. This was no regular spanking—his raw ass buzzed in pain.

He felt his uncle's hand slap at his forearm.

Get those hands away from your ass! Stand up straight.

Liam thought he'd show off by drinking outside—little did he know the snitch 18-year-old neighbor girls would rat him out.

He stood there, bare as could be, facing his uncle, Mrs. Johnson and her two girls his age and their friend.

The woman let out a half-sarcastic gasp, drinking in as much as the lad's naked body while she had the chance.

Liam's eyes flickered toward his crumpled boxers in the corner, hoping to put them on and regain a shred of dignity. His uncle's hawkish eyes caught him.

I apologize for my nephew, ladies.

He got near the lad, lowering his voice—but purposely not enough that the other's couldn't hear.

You stand in that corner till I tell you to move—facing the room; not hiding with your bottom toward us. Hands on your head, or that ass will turn purple.

The girls whispered amongst themselves, delighted at the spectacle.

I can't believe he has to go naked! 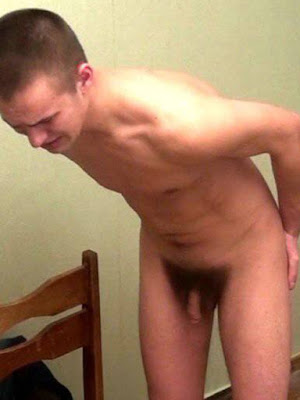 Posted by geilerJunge at 8:21 PM