Bared on Lady's Night–Stand in the corner, young man!

19-year-old Matty's blood pounded in his temple, and turned his cheeks tomato red. His other cheeks, the ones behind his waist, were covered (not very well) by his shaky hands, as if by instinct; a desperate attempt to hide them from curious eyes.

The lad's bottom was bare as the day he was born—and facing dead-on his stepmother's Wednesday night knitting circle, which was crowded into the den.

Had it been one minute or sixty that he had been standing there, half-listening to her angry lecture? It started with his shirt and jeans; with him standing there in his briefs. He may have been spared further humiliation, if he hadn't rolled his eyes.

He was, and felt, totally naked in front of every housewife on the block.
The women, dumbstruck at first, first scoffed, then laughed, then mocked. You sure know how to discipline, Sue! That'll teach him.

Wait till your uncle gets back from the late shift! Till then, stand in the corner, young man! 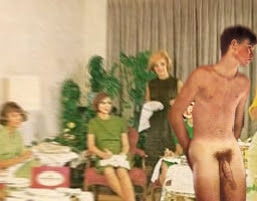